Posted on Dec 20, 2016 in Exploring Self Outside the Classroom

Throughout our childhood we have been told to be brave; that to be scared is a sign of weakness and is unacceptable. That fear is a negative emotion. Over the years, fear even became a convoluted gender issue. It became acceptable for women to express fear, but for men it became a matter of shame. Is fear really that undesirable an emotion that people might be better off without it?

Let us today dissect fear without clouding it with our conditioning and judgment.

Think about the last time you got really scared. Imagine that moment; what is the environment like? What can you see? What do you smell? What is the danger you perceive at that moment?

Fear is a vital response of our body to a perceived physical or emotional danger. In its heightened sense, it is the response to either an unknown outcome, or a result undesirable by the individual at that moment. Without fear we might not really survive for long because we might fail to identify life-threatening situations, both physical and emotional, failing to safeguard ourselves; hence fear is healthy.

Then What’s the Problem?

It is our reaction or approach to fear that makes fear problematic. You might have seen people killing certain insects almost instantaneously as one sees it. However, in reality, the insect might be a non-venomous, non-threatening one. But the moment we see it, we are engulfed by a surge of fear, and end up violently responding to it. And why does that happen? Sometimes fear is a manifestation of past experiences. For example, you might have endured the pain of a bee sting in the past and have seen other people bitten by insects, either in real life or on television! Our brain receives and stores that data and any time it perceives a similar situation, it starts gearing the body to protect itself. Hence that dilated pupil, raised hair, sweat all over, and so on and so forth. If we are able to identify the particular insect we encounter as non-threatening, we might be able to deal with our fear for insects in general, better.

Fear of Strangers and Role of Empathy

Strangers in a sense work the same way as insects. We are guarded when we find ourselves amidst strangers, or we find amidst us, a stranger. Our conditioning has taught us to look at strangers as someone to be fearful of. But in reality this fear may be largely an irrationally perceived and unexplored part of our mind. We perceive threats where none might be and a society, as a community becomes wary and rejecting of unfamiliar people. In reality, these unfamiliar people or strangers could be friends of the future. That happens only once we reject the biases and try to get to know other people, these erstwhile strangers. They are not there to hurt us. They are there, just as scared, perhaps more than we are. And as we get to know their story we develop a sense of empathy and understanding. Psychologists have identified three types of empathy – cognitive empathy, emotional empathy and compassionate empathy

Cognitive empathy is understanding someone’s thoughts and emotions, in a very rational, rather than emotional sense.

Emotional empathy is also known as emotional contagion, and is ‘catching’ someone else’s feelings, so that you literally feel them too.

In his powerful book, The Wisdom of Crowds, James Surowiecki has rightfully said, “It may be, in the end, that a good society is defined more by how people treat strangers than by how they treat those they know.”

Fear of Failure and Changing the Context of Success

Take the case of fear of failure. The characteristic of humans to be frightened with the prospect of failure is overwhelming. Before we start fearing failure, we must understand the very concept of failure and success. I was once working with a bunch of young adults who’d lived all their lives in a slum in the outskirts of Delhi. I had asked the group to find their place on a rope on the floor that represented a continuum. One end of the rope was abject failure while the other end represented absolute success. While many children placed themselves on the success zone, there was a particular group of young boys who stood on the failure side of the grid; more towards the centre point, but still in the failure zone. I asked them why did they think they were on the failure zone? They said, “ Oh! This is good! Last year we would have been on the extreme/abject failure side of the continuum. But this year we feel we have become better and that’s why we choose to stand closer to the centre, though we feel we have not yet achieved the success we would have wanted to achieve.”

“And what would that success look like?” I asked.

To give you a context, this was a workshop on peace building. And for those boys, the success parameter was different from the others in the group.

Success and failure are extremely personal and we cannot have the standard measurement to quantify it. The day we understand that, we will cease to be afraid of failure on a standard set by someone else. We will be less anxious and feel less judged by others. Life could be more peaceful and happy. Those boys were happy even if they were on the failure zone of the grid set by the facilitator because it is they who defined and owned the parameters of their own success.

Rationalisation: Think about what’s the worst case scenario. That will help you segregate necessary concerns from baseless fears.

One Step at a Time: Face your fears but one step at a time. While you don’t need to rush yourself into it, at the same time you will have to stretch your comfort zone a bit to learn to ‘not-fear’.

Seek Help: If you think an external agency or person can help you overcome your fears, don’t hesitate to seek help. Sometimes a third perspective can even help in identifying root cause of our fears.

The idea is not to develop absence of fear, but to not let our fears make us dysfunctional.

EdTerra Edventures organises thematic summer adventure camps for youth. If you are between the age group of 14 to 16 years, you can now directly register for Camp Fearless to be conducted in summer 2017 as a part of EdTerra’s GoDirect program. 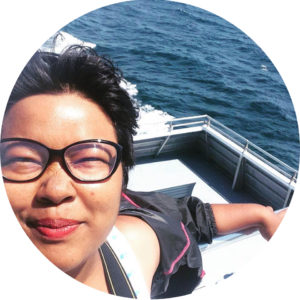 Arindita Gogoi:  Arindita travels all over the world to connect with children and at-risk youth, having facilitated at creative community camps like PYE Global Network’s Power of Hope (Whidbey Island, USA). She is a theatre and creative arts enthusiast and is usually found travelling solo when not facilitating. She is a trainer, blogger and journey mentor at EdTerra.