Posted on Feb 05, 2018 in Around the Globe,EdTerra's Travel Nerds

Canada – A country that’s been on my to-visit list for a long time, finally the month of November 2017 presented me with an opportunity to visit the ‘Great White North’. Was it worth all the hype? Absolutely!

On my frequent visits to the US, I often got to hear about Canada and got to meet a few Canadians as well. Needless to say, these interactions and all that I heard of the country (nearly all of it being praise, and more praise!) got me curious about the country that is also known, in jest, as America’s hat, being located right above the US.

Accompanied by a very interesting companion on my maiden trip to Canada, my journey through the north – east of the country began! The first stop on my Canadian sojourn was the city of Toronto, capital of the province of Ontario. Known as one of the most multicultural cities in the world, Toronto is a wonderful city to savor diversity in terms of food, people, religion, art, culture and experiences! Like any other metropolitan city, it has its cons in terms of terrible traffic (it can get really, really bad), being expensive and of course, being crowded (but crowded purely in North American terms, and nothing compared to what crowded means in India!). But the pros outweigh the cons by a mile or more; plenty of sightseeing opportunities, art districts, food districts, a Distillery District (that’s a first for me in all my years of travel), good connectivity, a thriving theatre district, to name a few. I timed my trip well..the city was dressed up for Christmas! 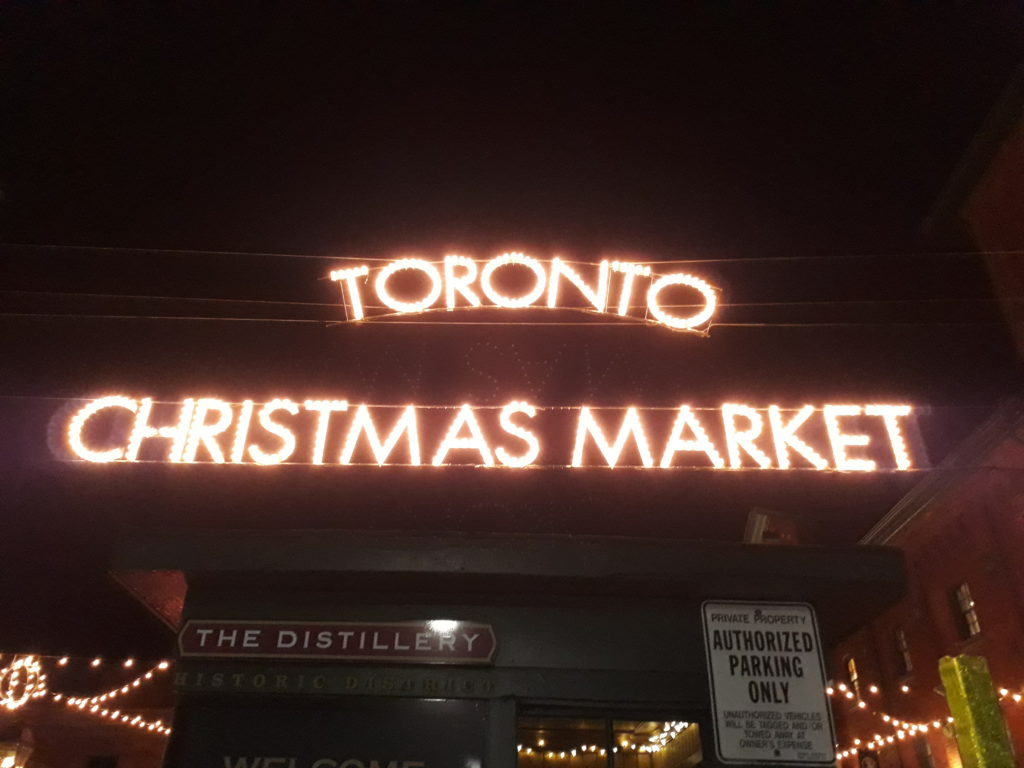 From the streets to the malls to the Christmas Markets, everything looked its festive best! Of course, I have to mention how nice people are over there. It is rather unbelievable how helpful people can be, often going out of their way to be of assistance. While in Toronto, a few places that had me impressed included the Harbour Front area, the Distillery Historic District and Downtown Toronto. I explored the city very briefly, saving more for later trips. 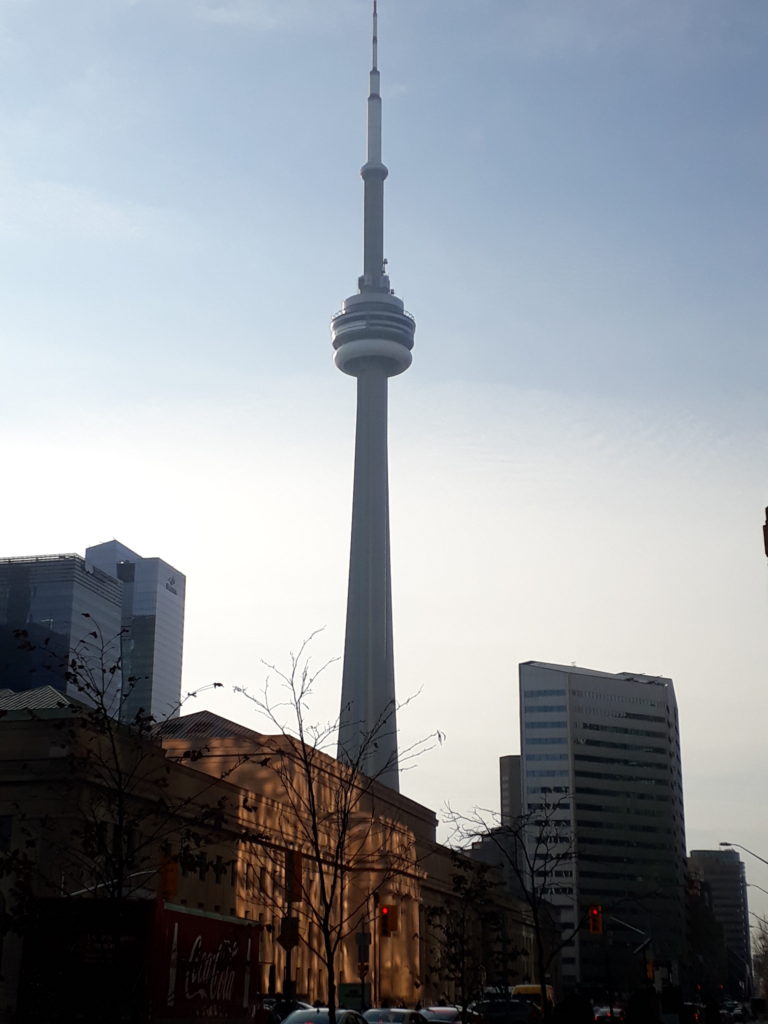 The next city on our list was Quebec City, located in the French province of Quebec, and on the banks of the Saint Lawrence River. My first impressions – a very quaint, ancient city that looked picture perfect. 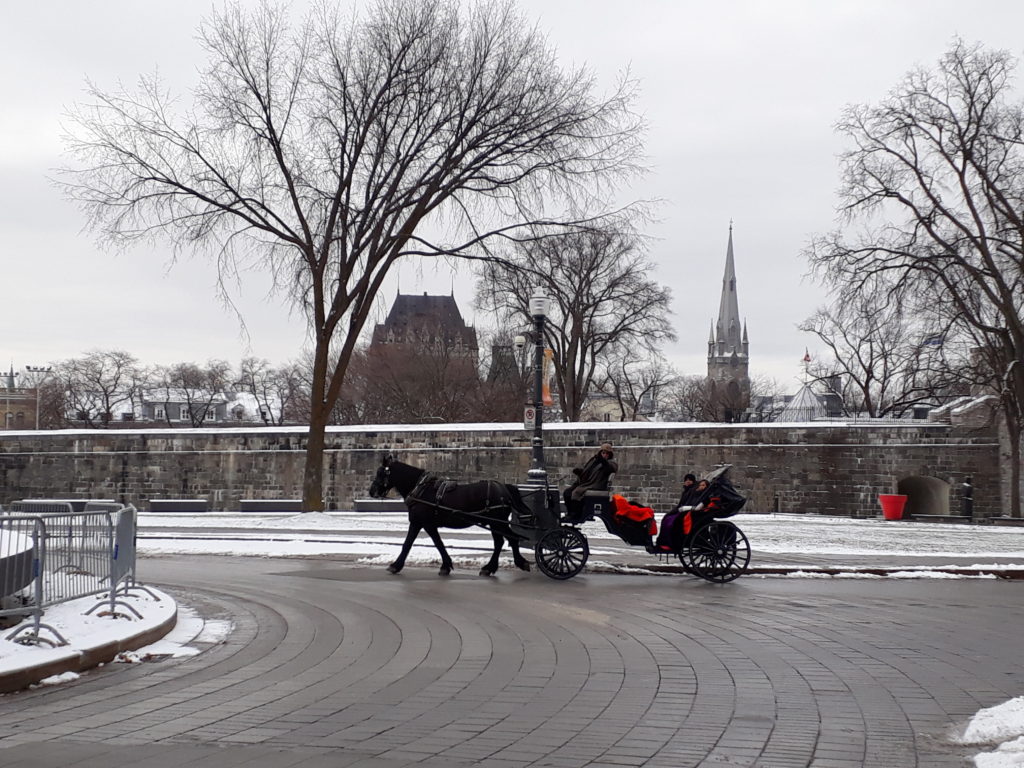 The Old City of Quebec

The fact that it snowed the night before we got to explore the city, added to its magical charm. Covered in a blanket of white, nothing looked more pristine. The ‘Old City’ is an UNESCO World Heritage Site, filled with ancient buildings offering an ‘old world’ charm. A walk through the tiny lanes and bylanes offered a glimpse into this very European like town. Incessant snowfall made the experience even more memorable. The cold weather called for some hot coffee, and after a stop at one of the tiny cafes to recharge ourselves, we continued our road trip up north-east. 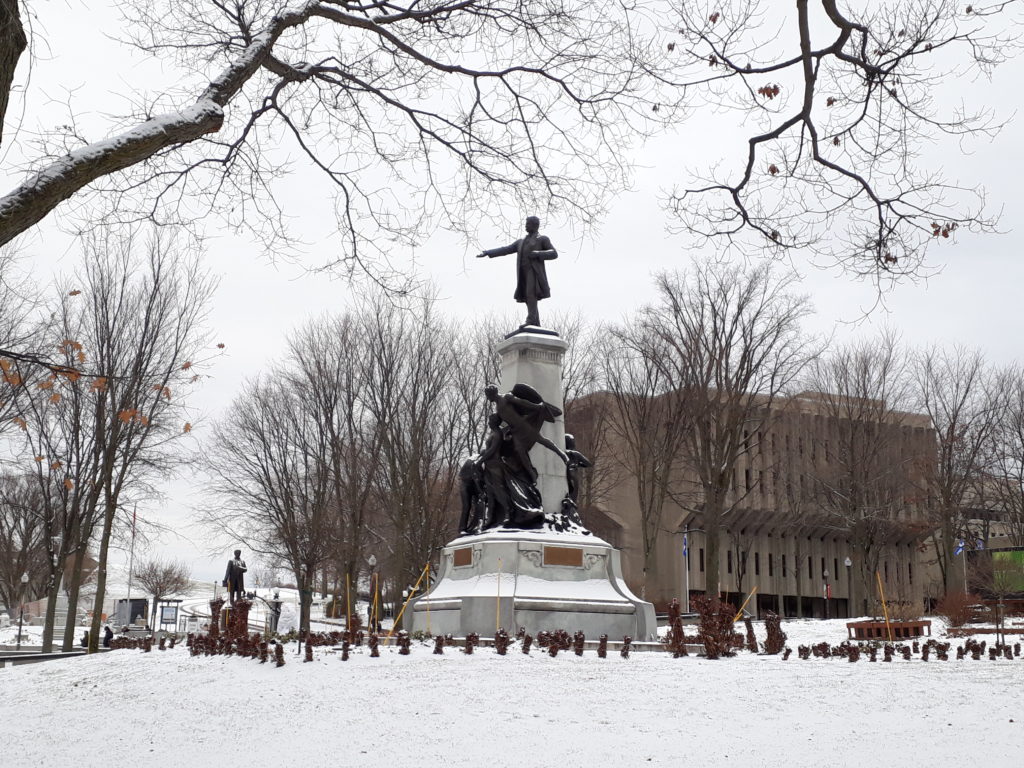 The province of Quebec offered unparalleled natural beauty that we got to experience while driving to the next city, Saint John, in the province of New Brunswick. Heavy snowfall accompanied us throughout the drive, which took about 9 hours. Icy roads and low visibility in certain areas added to this very thrilling experience. An interesting aspect of the drive was the names of towns and cities we encountered along the way, and the language of signages and how they changed from one province to another. For a while it seemed like we were on the sets of Game of Thrones, with the kind of names we saw on the way. While Quebec is a largely French province, New Brunswick is the only bilingual province in the country, with two-thirds of the occupants considering themselves anglophone or English speaking, and one-third francophone or French speaking. Another interesting aspect was the wildlife signages…from deer to caribou to moose to cattle, the highways and inner roads through forested areas are lined with such signs. Unfortunately, we did not get to spot any wildlife on our drive.

We got into the city of Saint John, a port city located on the Saint John River in the Bay of Fundy. Saint John enjoys the privilege of being the first in a lot of aspects, including the very first incorporated city of Canada, and home to the oldest publicly funded school of Canada, Saint John High School, and the first chartered bank of the country. With its location along the Bay of Fundy, the city had a long history of shipbuilding. Its economy now runs on tourism, the port area, the largest oil refinery in the country and the Moosehead Brewery, the country’s only nationally distributed independent brewery, among others. 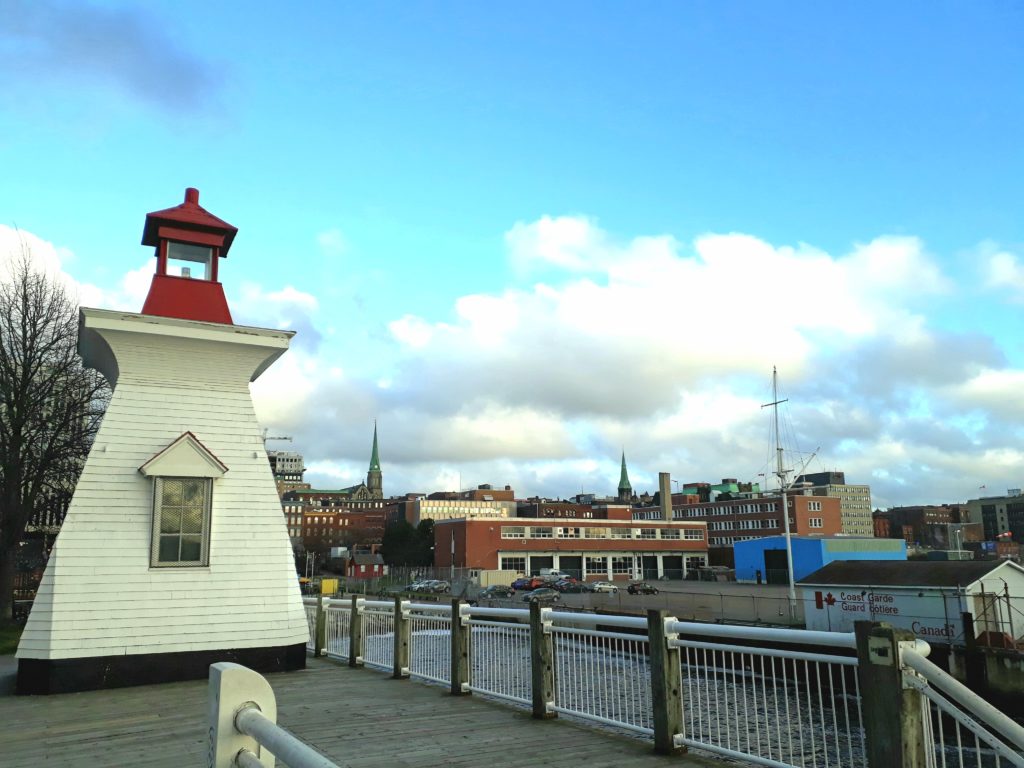 The lighthouse of Saint John 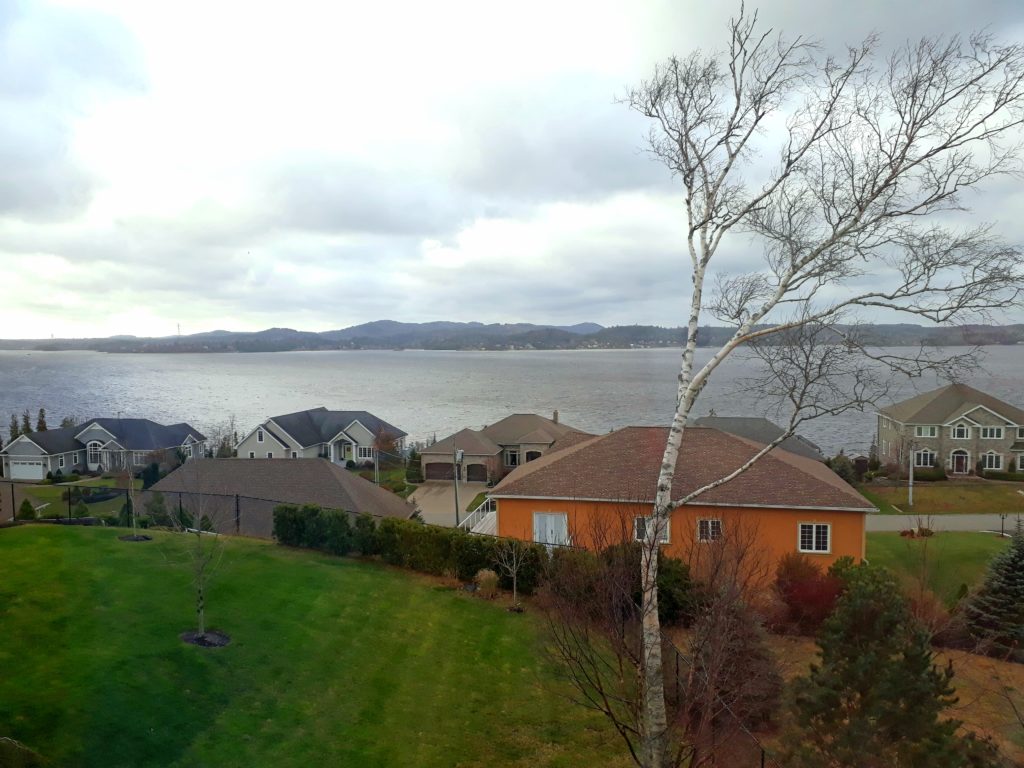 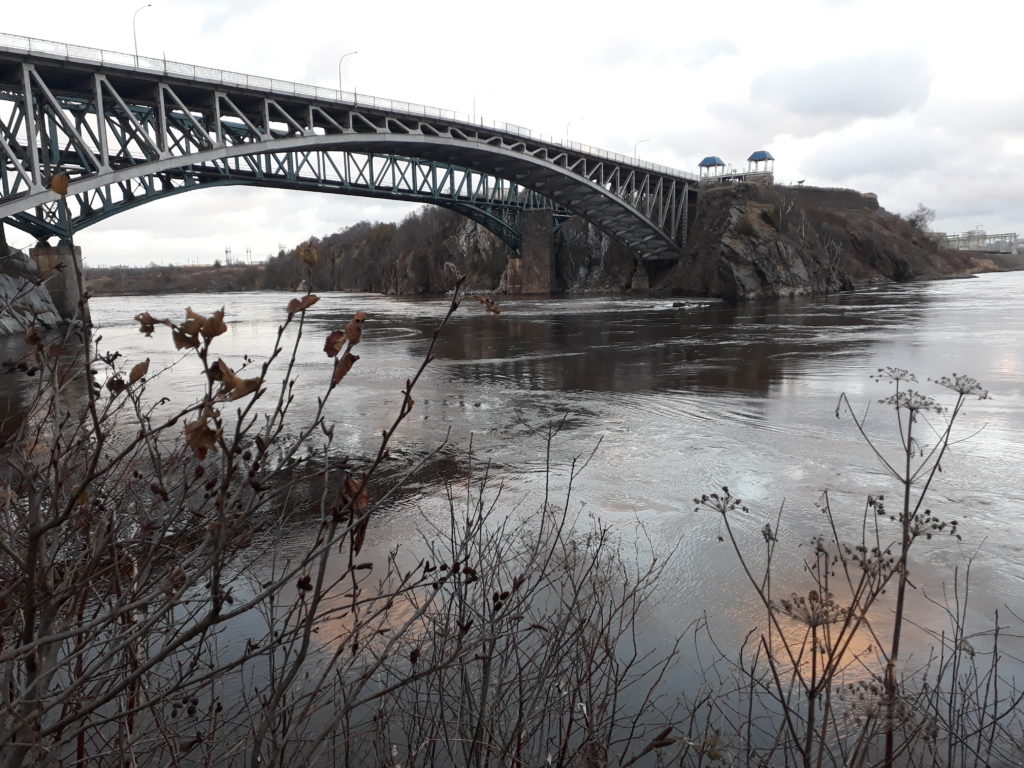 The Reversing Falls of Saint John

The city is small, and picturesque with most of the city running alongside the river. Don’t expect much in terms of sightseeing..you will get to see more in terms of natural beauty. Beautiful estate homes, long winding roads, churches and ancient buildings, a happening uptown area which also forms the city centre, thickly forested areas, plenty of deer walking about…that’s a slice of Saint John for you.

After a short stint in Saint John, we made our way back to the province of Quebec, to the city of Montreal, named after Mount Royal, a triple peaked hill in the heart of the city. Once again, extreme cold greeted us, with temperatures as low as -15 degrees, accompanied by snowfall once again. The cold was no deterrent, and warmly clad, we began exploring the city by foot. It also happened to be my birthday, and indeed, the city of Montreal made it ever so memorable for me. Once again, the old part of the city, Old Montreal, is dotted with architectural gems, including the Basilica of Notre Dame, Chateau Ramezay, the Montreal City Hall, the Customs House at Palace Royale, the old port and of course, the Jacques Cartier Bridge, spanning the Saint Lawrence River. 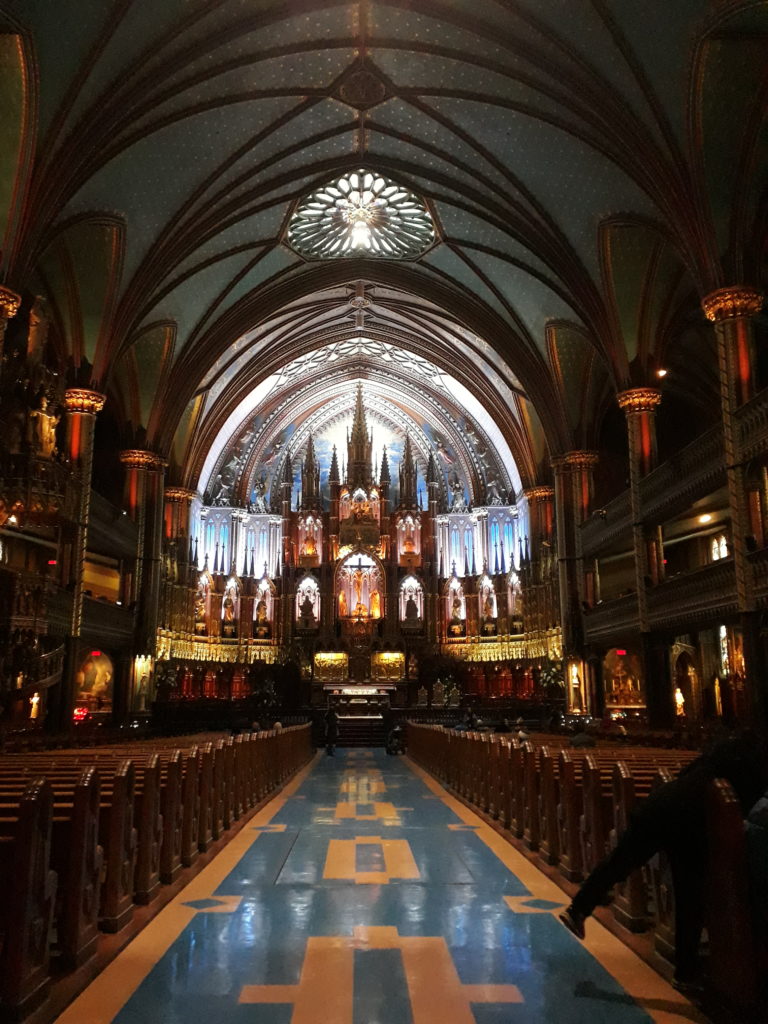 The Basilica of Notre Dame

There is so much more to explore in Montreal, and this visit was just a teaser. We did however sample the famous ‘Poutine’, local to the province of Quebec. What is Poutine? French fries topped with gravy and a mix of cheese and curds. One word..divine! An ice hockey game, which is a must-do while in Montreal, will have to wait for our next visit! 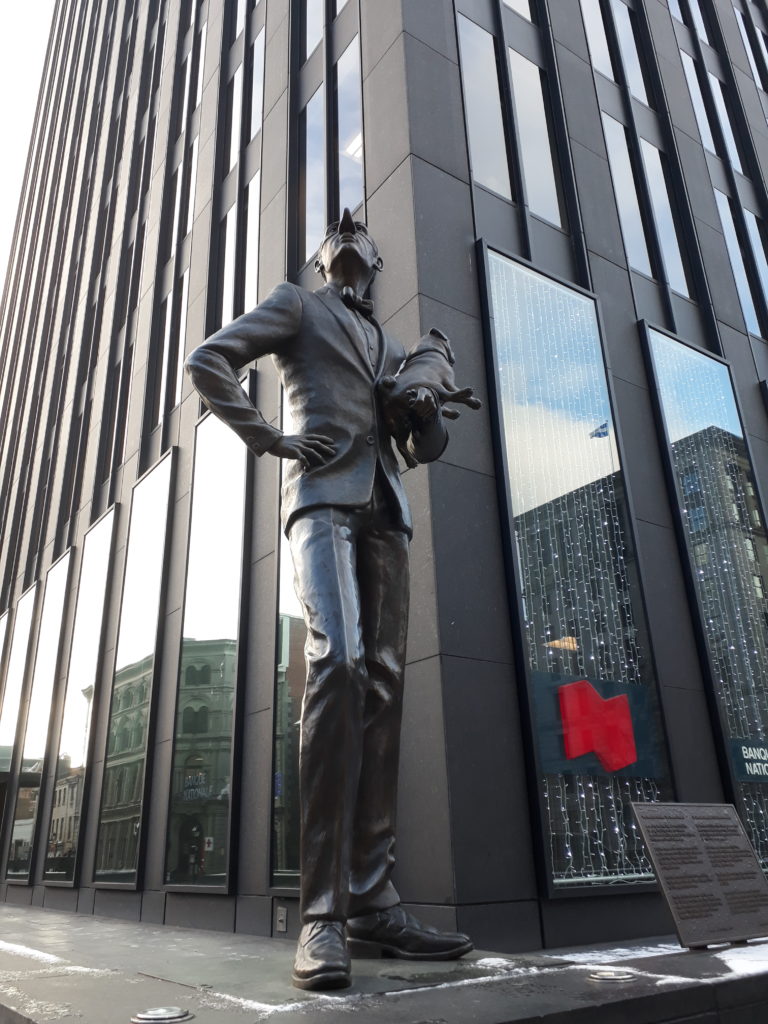 Statue of the English man and the pug

From Montreal, we made our way to Niagara. However, en-route, a never-ending traffic jam on one of the main highways (with a line-up of more than 10 kms of traffic!) made us take a u-turn and head to the closest city to where we were, the capital of Canada, Ottawa. This was one detour we did not mind taking at all. Driving through the capital at midnight was exciting. Once again, the buildings and architecture left us in awe. After getting some rest, and a hearty breakfast (I have to mention here, our breakfast at La Creppa, is hands down the best breakfast I’ve had during my travels, coupled with excellent service) we spent the next morning driving around the capital once again. From Parliament Hill to the Central Chambers to the Laurier House and the embassies of various countries, there was much to marvel at.

After Ottawa, we made our way back to the province of Ontario, to the city of Niagara, bypassing Toronto on the way. After the long drive, we couldn’t wait to get out and stretch our legs and soak in the stunning Niagara Falls by night. The sound of the falls, coupled with it being lit up, had us mesmerized. I’ve made innumerable visits to Niagara Falls but from the US side. I was always told that the Falls are way better from the Canadian side, and I would often think, how much better could it actually be? I can now say, it is actually way better! 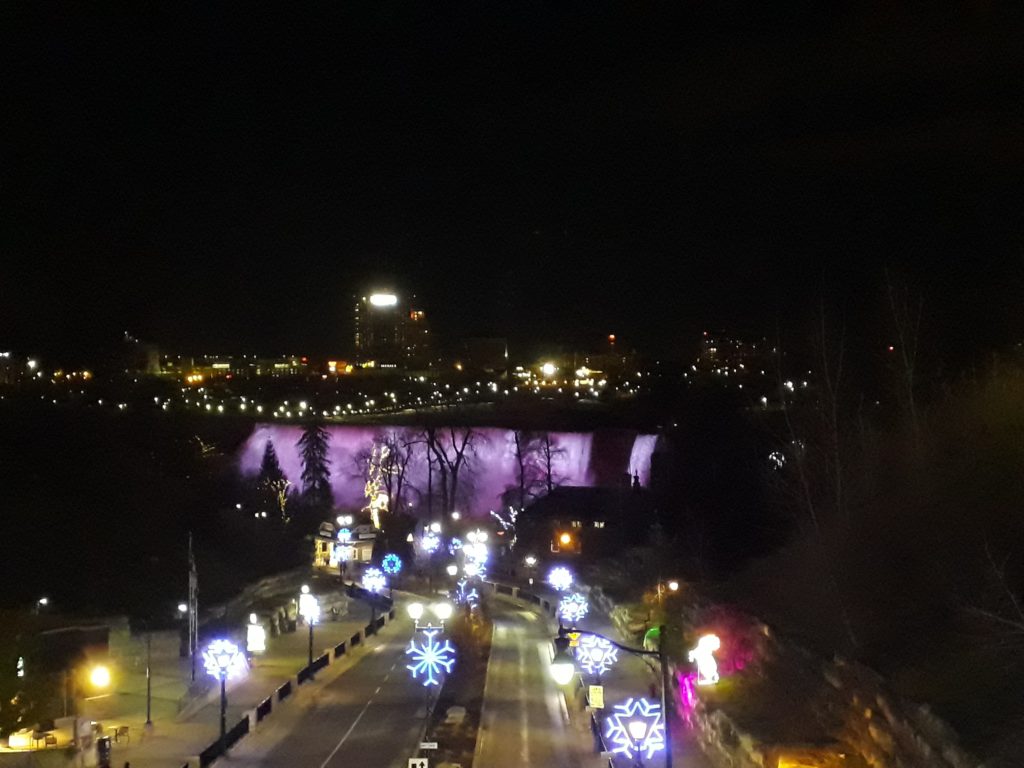 Festival of Lights at Niagara Falls

Once again, braving bitterly cold winds, we walked around the city, soaking in its magical charm. The next day, we headed to Niagara College on a wine tasting tour. Niagara is known to produce some of the finest wines, and a sampling session was something we couldn’t miss. We spent the evening at Clifton Hill, indulging in kiddish fun as we roamed the promenade lined with wax museums, video game arcades, shops, even a mighty giant wheel that we ended up riding to get a bird’s eye view of Niagara Falls and beyond. Another spectacle in store for us was the Christmas Festival of Lights at Niagara Park, an absolutely stunning display of Christmas lights! 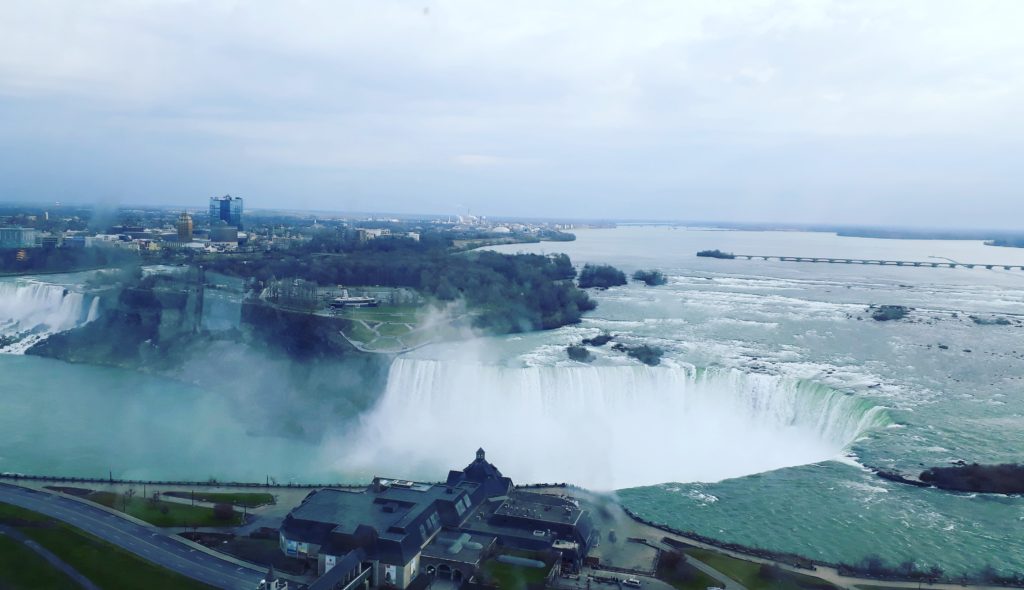 It was time to head back to Toronto, and the following day, after spending the morning soaking in the cold mist of Niagara Falls, we headed back to Toronto to catch our flight back home. 10 days flew by, and there was never a dull moment. Our trip, made up of long drives through the great open countryside showcased absolutely gorgeous landscapes, sunrises and sunsets, endless conversations, food stops and photo stops, music, crazy traffic, icy roads, snowfall and blizzard like conditions, and so much more.