The Universe is the Limit – US NASA Tour

From Orlando to Niagara, New York to Boston and all the way back to India, if there’s one thing you could spot on everyone’s faces, even during a flight at 4 am, it was that spark of curiosity and joy for the surprises that were waiting for us behind every moment that would pass by.

Being adventurers, travelling, meeting people and trying out new cuisines has been an integral part of our journey. 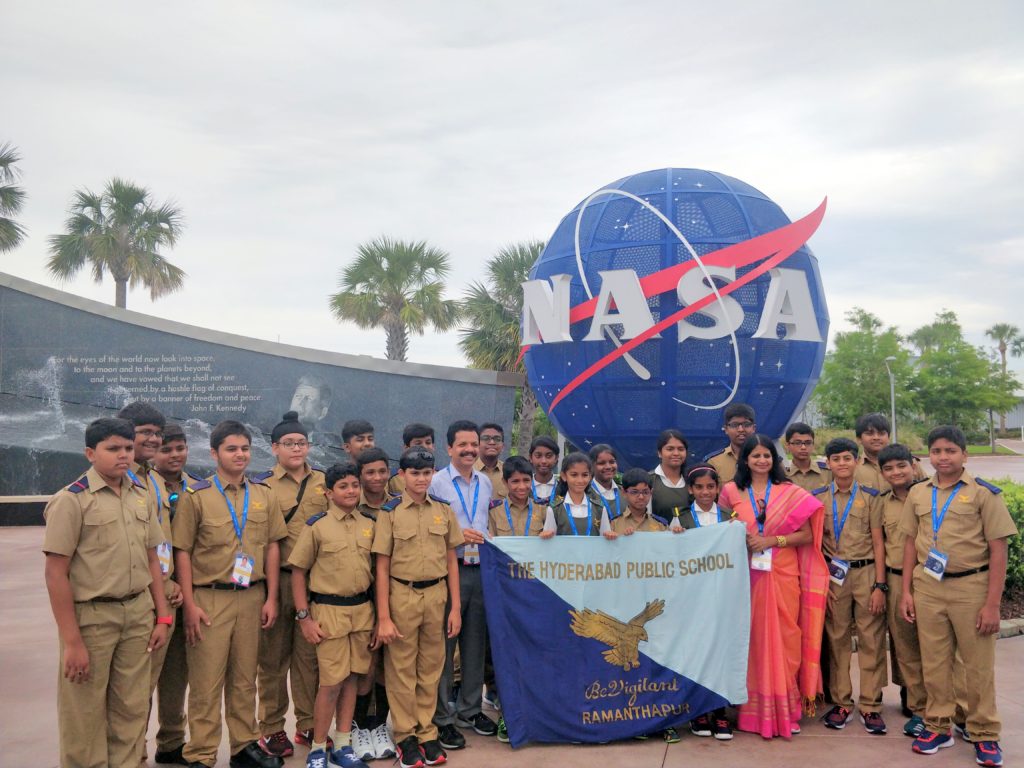 Each day has been a new experience throughout our tour. From watching the launch of a rocket at Kennedy Space Centre to going up to the 102nd floor of the Freedom Tower in 42 seconds, from the various scary rides at Universal Studios to the ferry ride to the Statue of Liberty, from getting drenched in the maid of the mist at Niagara to walking the corridors of MIT and Harvard, from eating unlimited Pizzas and burgers to  shopping at Walmart, each day has been adventurous and breathtaking. 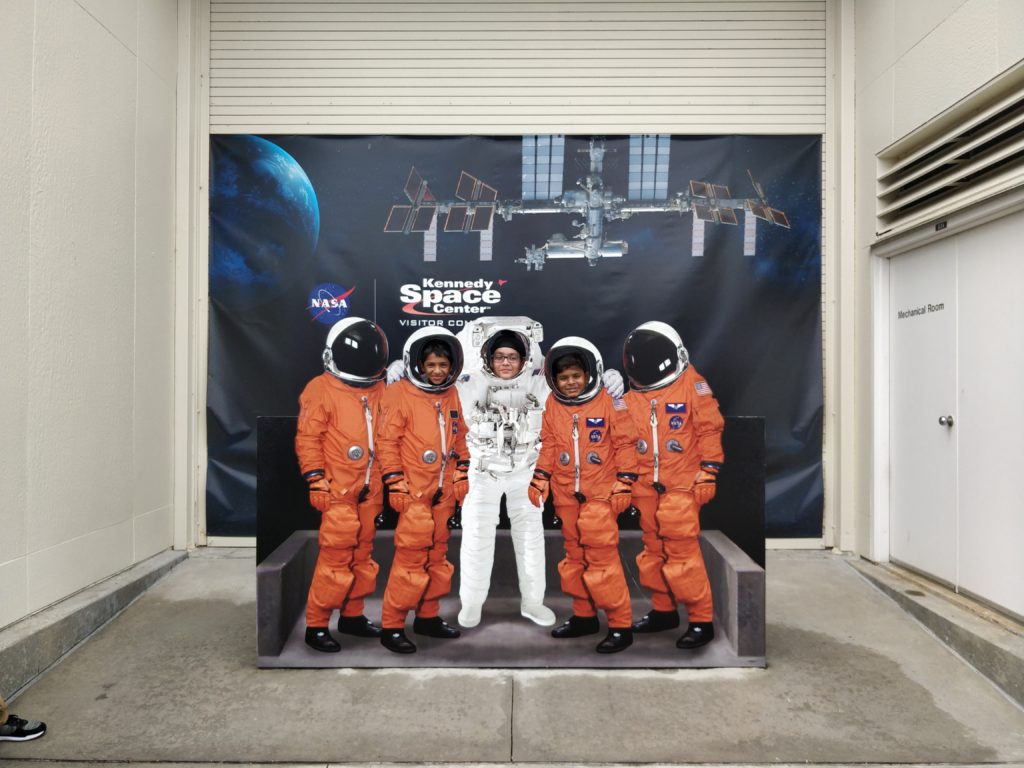 So when the 24 of us, along with our School Principal, Dr. Narsimha Reddy, and Padmavati Ma’am and our much loved and friendly tour guide, Mr. Nipun Malik went from city to city, touring and experiencing some of the best America has to offer, we learnt one definite thing, “The sky isn’t the limit, the universe is!!!”

The dream park at Disney World was filled with fantasy rides; the Disney parade and the fireworks that filled the sky with excitement and loads of fun. During the parade the cartoon characters came alive in beautiful costumes, shaking hands with us. 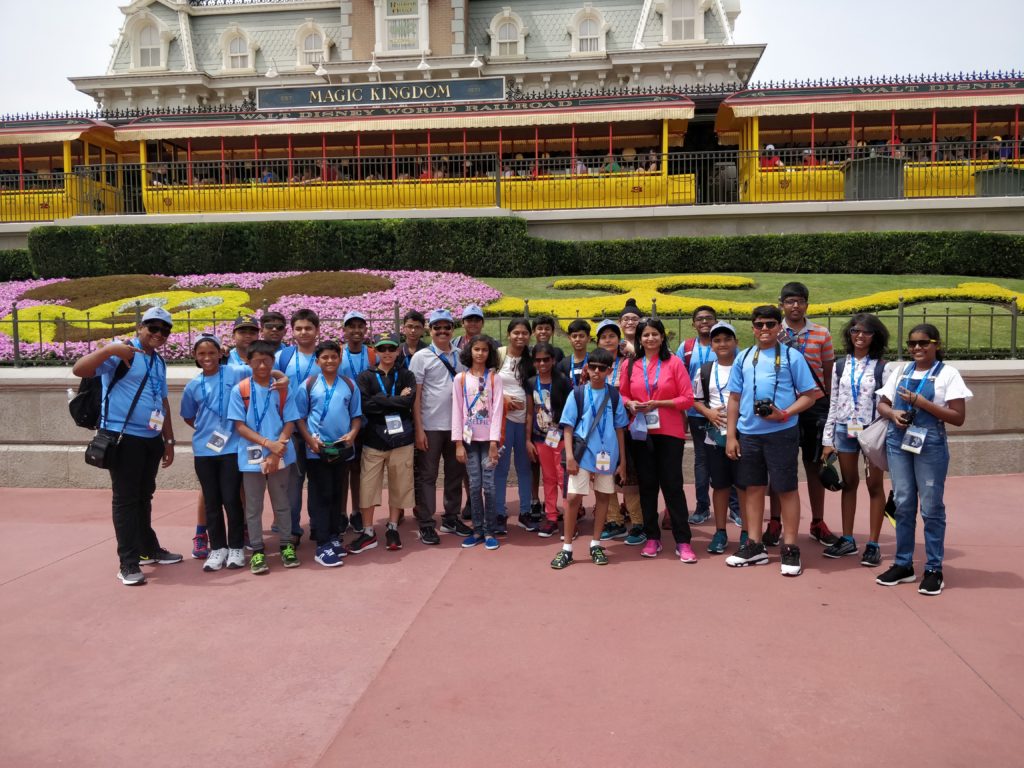 Talking about outer space and discovering the unknown has taken Man from Earth to Space and also to the moon. This curiosity to look beyond the Universe and see the launch of a rocket from Kennedy Space Centre was truly a dream come true for each one of us.

To take a peek into the cosmos, into uncertainty is truly marvellous and we felt very lucky to witness this at NASA. NASA has pioneered various space programs for mankind at Kennedy Space Centre, all of these felt alive. We could meet the people behind these breakthroughs and could learn valuable lessons from them. 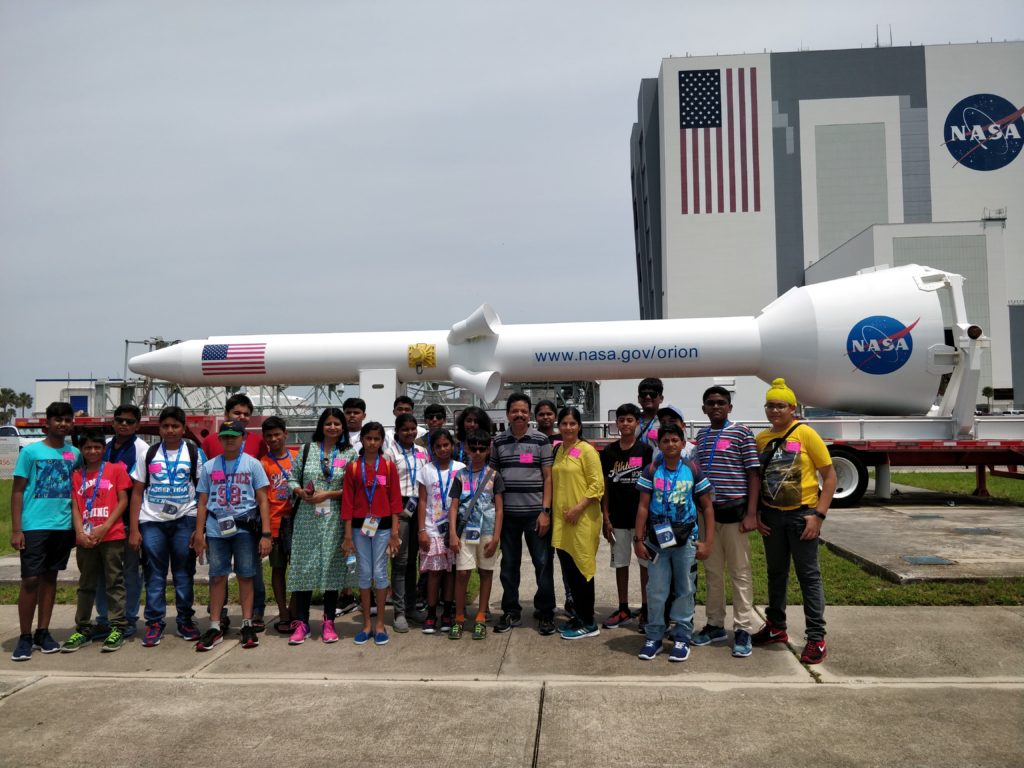 Universal Studios is famous for its thrilling rides, such as Hulk roller coaster, Dudley’s Ripsaw Falls, Jurassic Park River Adventure, Amazing Spiderman and King Kong Skull Island. Universal Studios in Orlando is also famous for the Wizarding World of Harry Potter and its Butterbeer. The mind-blowing, crazy and scary rides at Universal Studios gave us goosebumps and made us lose our heartbeats! 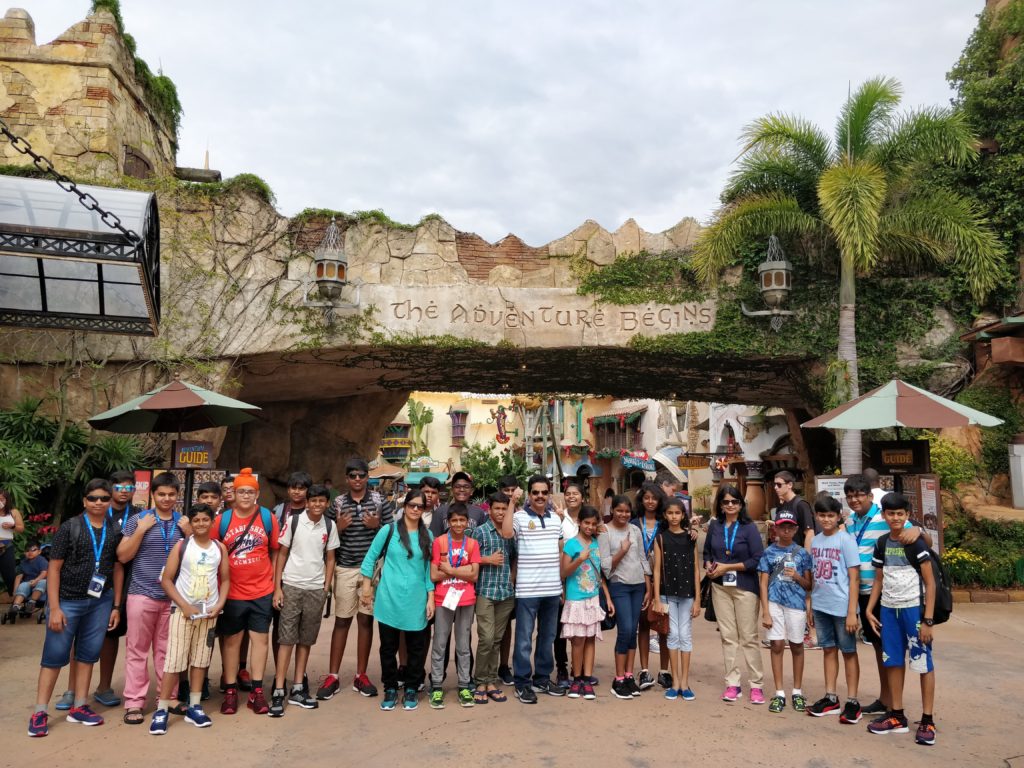 As captivating as the name of the boat ride “Maid of The Mist” sound to the ears, it only keeps getting better with every wave that crashes against the boat, taking us closer to the gigantic Niagara Falls. The experience of watching 24 lakh litres of gushing water per second in front of our eyes with a magical sound was unbelievable.

The Falls showered us with its mist carried by the strong winds. Even though we were drenched in the mist we couldn’t help but gaze at the spectacular beauty of these Falls. It will always hold a special place in our hearts and memories for years to come. 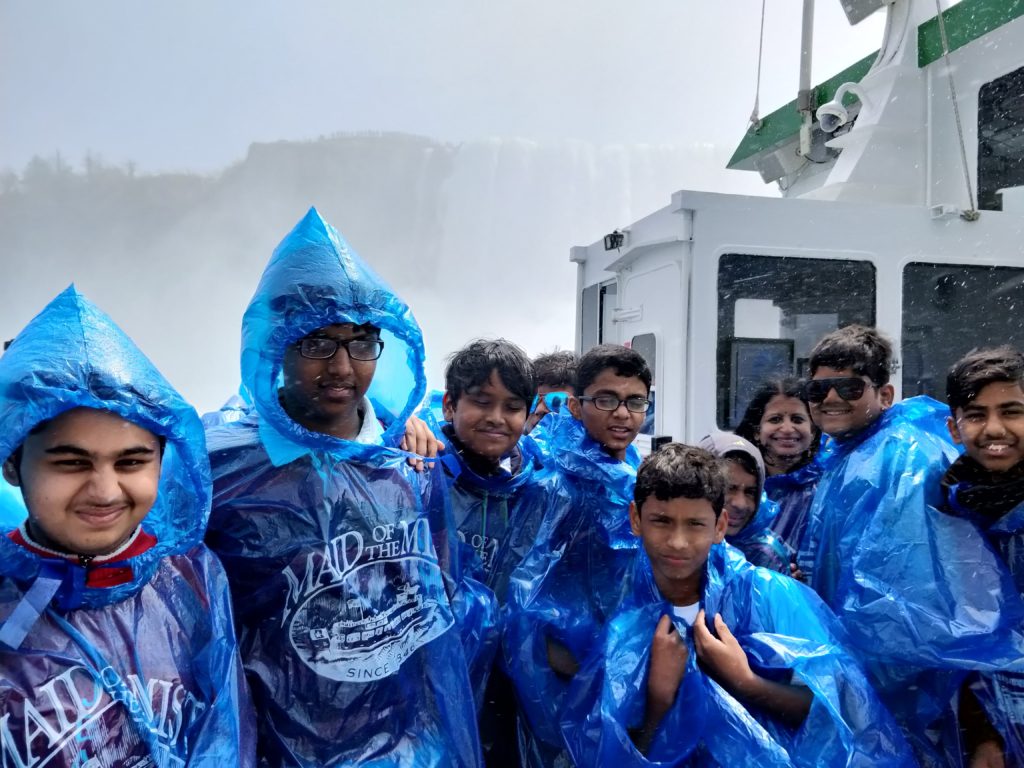 Also known as the Big Apple, New York City is the business and fashion capital of USA. The Twin Towers which came down during the terrorist attack in 2001, now has a beautiful memorial built in the same place. Alongside it is the new World Trade Center called Freedom Tower, which has 104 floors. We had the opportunity to go up to an observation deck which is on the 102nd floor in just 42 seconds. The view of New York from here was just breathtaking.

Standing at the centre of “Times Square” which is brightly adorned by billboards and advertisements and which is also referred to as the ‘crossroads of the world’ is where the New Year’s ball is dropped down every year. 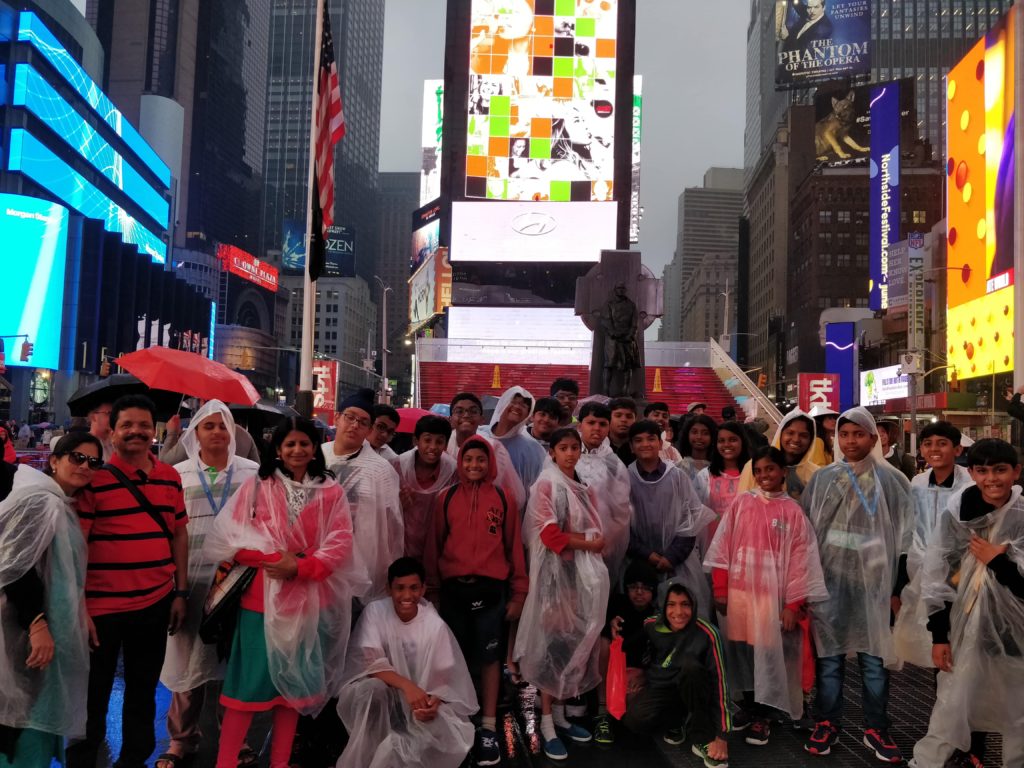 The view of the Statue of Liberty was just amazing and kept us spellbound and we just couldn’t take our eyes of this beautiful statue of a robed woman in copper, holding a torch and standing tall in the midst of the Hudson River. The statue stands in all its glory as an architectural masterpiece and also serves as a reminder of the friendship between the United States and France. Seeing it up close, we felt really small, when we gasped at the enormous size of the torch and the face of the statue. 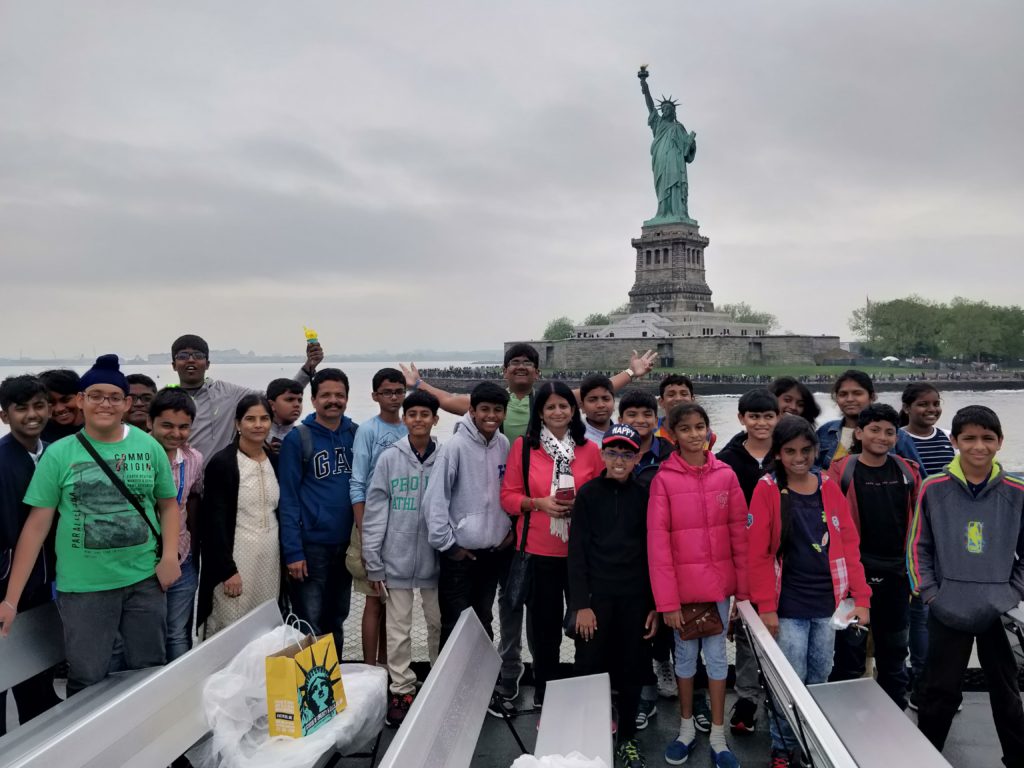 If we were to give a name to the Madame Tussauds Wax Museum, then we would call it a  ‘Museum of Celebrities’. Wax statues of famous people around the world were everywhere and we did not miss a chance to pose and take selfies with them. 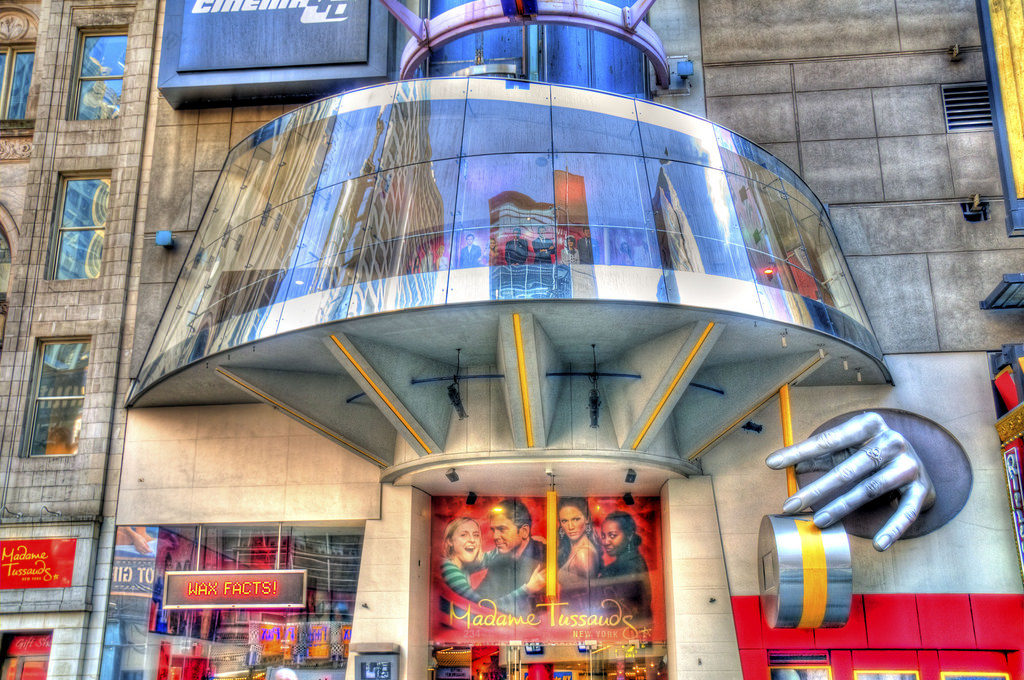 Walking through the corridors of MIT and Harvard made us realise that there is so much to learn and explore. Looking at the students and labs made us understand the importance of education. We hope we too will get an opportunity to come and study in this prestigious institution one day. 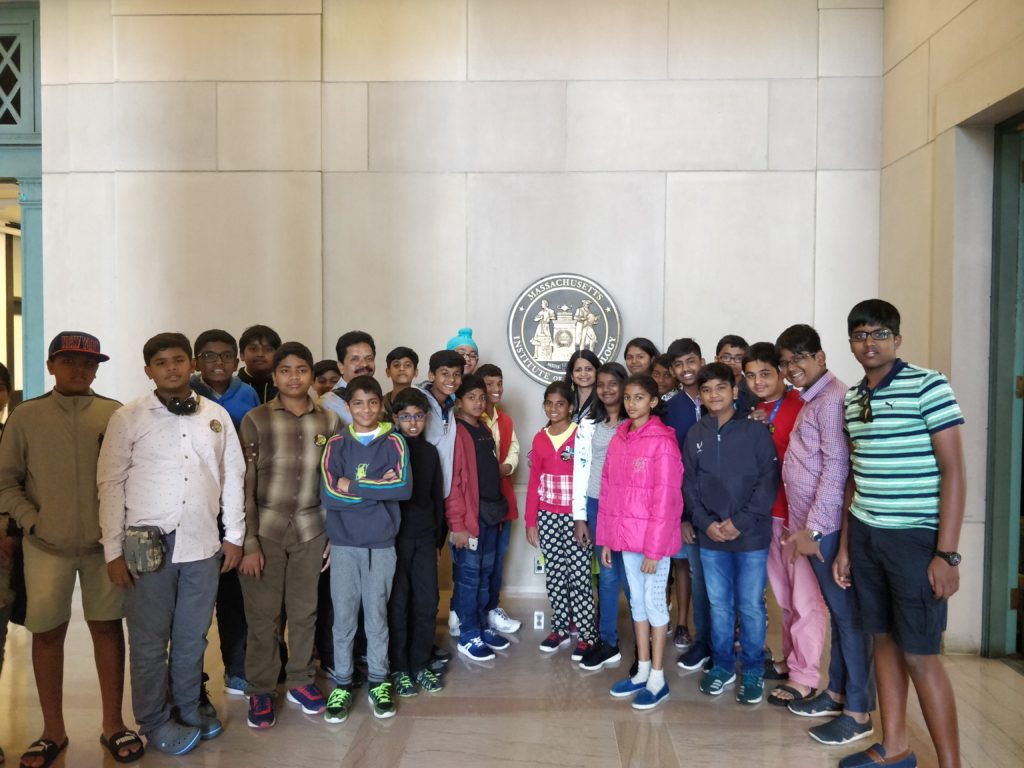 EdTerra Edventures conducts various international and domestic programs for the youth. If you go to school and are under 17 years of age, ask your school to contact us to arrange a visit to your school for an introduction to the “USA East Coast Space Adventure” and other journeys under EdTerra’s Going Global Program.